Four hours in the sun, Still feeling the Bern 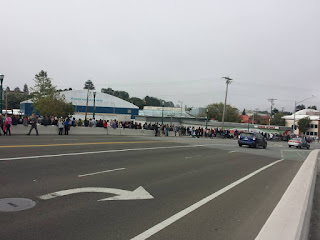 Tuesday May 31st, I begged and pleaded with my boss to let me have the afternoon off after a three day weekend, so I could go see a Bernie Sanders rally in a building named after a evil company. My boss the decent human being he is let me go. I am grateful to have a boss who cares. At 9am I made my way over to the venue. Knowing there would be a line I wasn't sure if I'd get in, but I had to try.

I knew I wouldn't be allowed to bring anything into the venue (probably for security reasons), I wasn't not smart enough to plan ahead for weather conditions. From twenty after nine until a little after one my pasty skin cooked in the sun, I remain sun burnt. I listened to the conversation of the people I was in line with, my agoraphobia kicked into high gear, I continually doubted the odds of getting into the venue, I got a little ticked of at all of the merch peddlers trying to make a buck off of the event, I was filled with joy when two kids from food not bombs were offering apples, I saw some of my activist friends, I gave a secret security dude a dirty look, I didn't talk to anyone in line because under the wrong circumstances I can be socially inept. When I finally made it into the venue I picked the darkest corner of the rally, and waited for Bernie to come out.

When Senator Sanders finally took the stage I wanted to cheer, I wanted to scream, but more often than not I was too choked up. I've heard his stump speech several times already. He talked about ending citizens united, he talked about education , health care, all of his usual talking points, nothing radical. That's not true, everything he said was something radical. Bernie's message is radical, because I can trust the intentions of this candidate. The genuine nature of candidate Sanders is backed up by a lifetime of consistency. I wasn't able to go to an Obama event in 2008, I am not sure if I would have had a similar experience or not. No matter the outcome of this years national election, everyone that has put in time in any capacity for Bernie Sanders must realize we need to further organize and continue to push for the things we need. Bernie is a fantastic candidate for me, but we must realize we are the force that has propelled his candidacy. I donated, I pushed hard online, but there was still so much more I could have done, and in theory it all adds up, I have to admit, thinking it over I regret not being able to offer more of myself. If you are like me the bad news is we probably won't get to phone bank or canvas for Bernie again, BUT the good news is we can parlay this moment into the next. This is our obligation now. 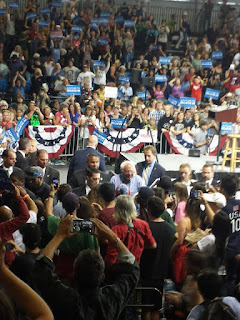 Posted by capitalism canary at 10:02 PM