If money is speech, what is the hole in my wallet?

I have been trying to completely understand how money became speech. I have been reading Supreme court majority opinions juxtaposed with the dissenting opinions from justices who were out voted based upon ideological lines. I have examined opinions from fellow bloggers that ask if money is speech than is poverty silence? 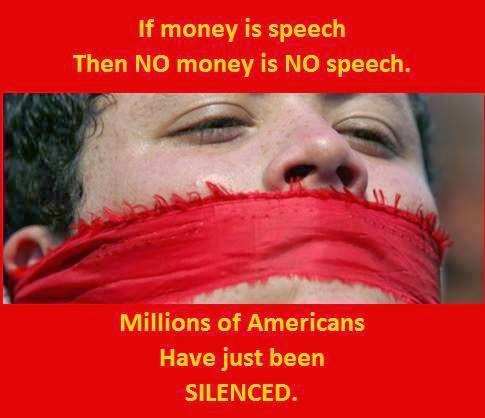 Has Buckley v. Valeo, Citizens United and McCutcheon given a wealthy minority the power to drown out the collective voices of we the citizens of the United States? The answer to this question is a softly spoken yes. How many  indigent Americans have their congress person's cell on speed dial? None, the money that has penetrated our government since Citizens United has been corrupting. The exobritant donations from PACs has allowed only a select few the ear of our elected officials. We the voting masses matter less and less as the coffers of campaigns grow.

In his majority opinion Chief Justice Roberts stated  "The Court must err on the side of protecting political speech rather than suppressing it.” If this statement is true how is it the court ruled in favor of voter id laws? The court struck down key provisions of the voting rights act with the 2013 Shelby County v. Holder  ruling. The writing on the wall should be visible by now. What is next in this class war I can't say. My voice has been muted. Is this the time we demonstrate actions speak louder than words?

We the masses, the workers, the everyday person have to forget our differences and realize this is very much a war between classes. A war everyone who punches the clock has been losing for too long.
Posted by capitalism canary at 8:01 PM