Not everybody has to punch the clock for a living.

Futurist Buckminster Fuller, wrote a lot of things, and he was wrong just as often as his insight proved to be worth merit. Something he wrote that may have credence as this human experiment advances is this:


We should do away with the absolutely specious notion that everybody has to earn a living.  It is a fact today that one in ten thousand of us can make a technological breakthrough capable of  supporting all the rest. The youth of today are absolutely right in recognizing this nonsense of earning a living. We keep inventing jobs because of this false idea that everybody has to be employed at some kind of drudgery because, according to Malthusian Darwinian theory he must justify his right to exist. So we have inspectors of inspectors and people making instruments for inspectors to inspect inspectors.


This notion will make most people in the west scoff. I can hear the echos of faux news pundits screaming "everyone will become lazy, and no one will ever want to work and society as we know it will implode after exploding...". I think that reaction is ricockulous. Those who are ambitious and unable to live a more simple life will labor, become entrepreneurs, government officials, investment bankers and so on. Those who are less ambitious could take up roles closer to home, such as childcare (what a concept actually being able to raise and spend time with your own kids) communal gardening, local civic action, local maintenance and so on.

This ideal bares consideration. If citizens could avoid wasting resources on practices like commuting, the shipping of food staples and working needles jobs, our world would be transformed for the better. This is a less is more approach, considering the use of carbon emitting resources, while improving our local habitats with people power. 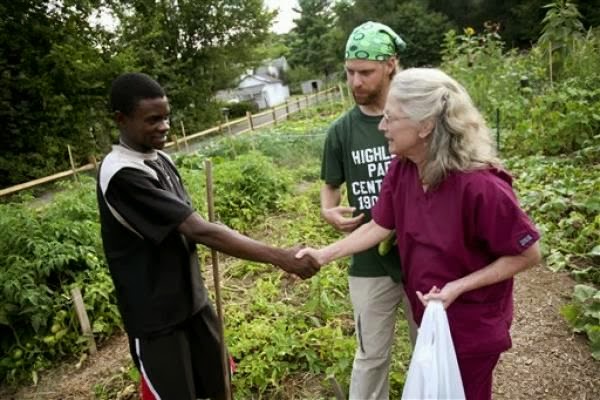 This approach does not create a mass of lazy "takers". It re-coordinates our society in a dramatically more sustainable fashion, where not only our lives wll be fulfilled, but our communities can be better looked after.  Imagine if parents and teachers could work in closer tandem, really focusing on the different ways our children learn. Imagine our systems of transportation not bogged down every day at nine and five. Imagine not having to drive to the super market, but being within a bike ride of where all your produce is grown. Imagine having the time to eat home cooked meals every night because more communally inclined family members could really focus on meal planning. This is the kind of future I believe Mr. Fuller had in mind when he wrote that quote..
Posted by capitalism canary at 1:12 PM