Minimum, why not maximum.

What does this mean for workers who are not employed through the federal government? It means little and the use of another executive order (EO) for all other non-federal employees is not a possibility. The president cannot force states to raise the minimum wage for non-federal employees. Congress or state governments are the only entities that can make this possible. If we want to think positive, this EO might be a way to further the discussion concerning the wages of some 1.6 million workers (BLS.GOV).

I do not feel the need to express optimistic views about a ten dollar minimum wage for all. The national debate is still concerned with the usual and tired "it will kill jobs" rhetoric. This is the same line that is used every time those on the bottom are recognized as having too small a piece of the pie or the need for new civil liberties (see Strom Thurmond's stance against the civil right rights act of 1964) is realized.

As Robert Reich discusses in his book AfterShock, when wealth is concentrated into the hands of the few, events proceed which make "the economy more susceptible to cycles of boom and bust." Every working age person on the globe felt the affects of the boom and bust cycle that culminated in the great recession beginning in 2007. It should be no surprise that 2007 was the year where wealth inequality reached it's highest peak since the onset of the great depression with 23% of total income going to the richest 1%.

What does wealth inequality have to do with raising the minimum wage? A higher minimum wage forces the bloated hands of companies like walmart and mcdonald's to pay more equitable wage. Would this work? I have no idea. The slimy bastards at those slave driving corporations never seem to take a hit without inflicting some kind of pain upon their employees.

I have troubles getting behind a minimum wage increase by itself. The method that makes sense to my feeble mind is implementing a higher minimum wage and creating a maximum wage. A maximum wage where profits (over the maximum wage) would be re-invested into companies, local infrastructure and most of all the working class.

Yes indeed I can hear the terrified screams of how this will ruin incentive, competition and the urge for the job creators to do whatever it is they used to do. However I look around and these very things are occurring in the current mode of production we have. Of course there are plenty of alternatives to this ideal such as worker owned and run business, new anti-trust laws and so on. I am in favor of those solutions as well.

To conclude, the free market visions are naive and they are based in classical economic reasoning. This kind of reasoning, does not account for the monopolization of said markets, or the severe hoarding of wealth we witness today. This naivety is based in the idea that markets will provide a kind of utopian push and pull that balances not only economic life, but also every other facet of life on earth. Again look around, when has there been a true free market like this dreaming prescribes. The answer is never. Markets are not rational no matter how often we ignore the history of man. 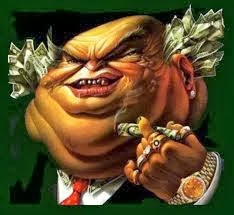 Posted by capitalism canary at 2:27 PM