Daily affirmations of Neo-liberalism. A brief review of A David Harvey Publication


Before I begin this review on David Harvey's eleven year old A Brief History of Neoliberalism, I should define neoliberalism as I understand it. We in the US have come to look at politics with a permanently stained lens. We see everything as either liberal or conservative. We need to inject a more nuanced outlook into our political understandings. That being said, neoliberalism doesn't represent what we call "leftism" or "liberalism" within the US political spectrum. This is a common misconception within US political discourse. The liberalism in neoliberalism includes US branded liberals like Democrats or the so called left in terms of actual policy measures, but also includes vast swaths of the right wing in the US. I don't consider politicians like Bernie Sanders to be cut from neoliberal cloth, but his 2016 primary opponent is definitely within the parameters of the neoliberal paradigm. Other US political icons who ushered in neoliberal policies are Ronald Reagan, Georger H. W. Bush, Bill Clinton, George W. Bush, Barrack Obama and the vast majority of congressional legislators elected to office since the late 1970s. The liberalism in neoliberalism relates to classical liberalism (think Adam Smith) with a face lift in regards to government intervention in markets and foreign policy. Economists like Friedrich Hayek and Milton Friedman are the grandparents and parents of supply-side economics and neoliberalism.

In a Brief History of Neoliberalism, David Harvey lays out the normalization of domestic policy measures, economic tweaks and foreign policy implementations beginning in the mid to late 1970s and opening up full bore during the Thatcher and Reagan Administrations. Policy implementations made in all three houses of the US government, lobbied by powerful special interest groups and multinational corporations, and backstopped by the Federal Reserve paved the road for this neoliberal dystopian reality we live in today.

I paraphrase in the following way the main thesis of Harvey's book. The neoliberal era has been focused on the reconstitution and restoration of elite class power. The main tool of neoliberalism is the concept of "Accumulation by Dispossession". Accumulation by dispossession is achieved through the privatization of anything the public sector has to offer, deregulation and a transformation of the way the populace looks at their society. Examples of privatization can be seen while looking at the recent and constant calls for ending social security, the rise of charter schools and the application of the cruel and unjust for profit correctional systems. The main focus of deregulation is noticeable in the financial sector. The deregulation of the telecom industry paved the road for changing, the way society sees itself.

Harvey offers a terrific account of the way our legal systems have helped to strengthen corporate person hood. The reconstitution of elite class power systems can also be seen in domestic and foreign financial institutions. Harvey provides the road map to the way trade deals such as NAFTA, the WTO, and the IMF have engaged in global usury providing a transfer of wealth from poor nations to wealthy nations. This transfer of wealth prominently flowed into the coffers of multinational corporations. The most prominent historical examples that Harvey offers are, the debt crises that effected Mexico and the western hemisphere during the 1980s. The debt crises beginning in 1983 ebbed and flowed and provided the groundwork for the austerity measures enacted in less developed and poorer nations during the 1990s (we can argue that the Clinton welfare reform was also a product of these austerity measures).  For example the privatization of Mexican public sectors, (most notably telecom) turned millionaires into billionaires in a relatively short amount of time. It should be easy to see that the neoliberal agenda is about siphoning wealth and power away from democratic institutions and toward the private enterprise of unaccountable multinational companies.

A salient point to realize is the contradiction, which neoliberal policy makers tend to advocate. Neoliberalism calls for the constant reduction in the size of government, which then leads to measures of privatization. This is a contradiction because in order for neoliberal policy measures to work, a strong state is required. A strong security apparatus, a dominant military as well as safeguards to ensure stability within so-called markets are all requirements of the neoliberal agenda.

A huge and integral part of the safeguards neoliberal markets require is "a large easily exploited and relatively powerless labor force". (P.144) If that labor force can be found in Mexico, China or India it doesn't matter, and a rotation of production will occur if that labor force should ever try to increase its bargaining power, or "the costs" of doing business. Another safeguard the neoliberal agenda requires are entities to ensure democratic calls for regulation remain in check. This is achieved in part, by maintaining what some politicians call a "business friendly environment". The concept of a business friendly environment is not only a dog whistle for the never ending worship of the mythical entrepreneur, it is also new-speak for a democratic populace that ensures big business will be allowed to do whatever it wants. This is the reality for the deregulated financial sector that existed before the largely toothless Dodd-Frank apparatus. It still exists after Dodd-Frank, and the calls to gut this piece of regulation can be heard from both sides of the aisle. 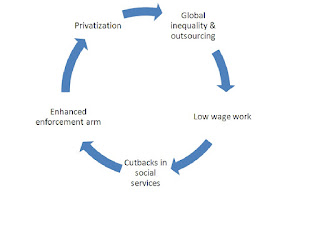 Privatization, deregulation, the implementation of so-called business friendly policies, intricate and obsequious trade deals that benefit elite class interests and outright state violence in the name of ensuring the interests of elites are the tools of Accumulation by dispossession. Accumulation by dispossession as grounded in the theory advanced by Hayek and Friedman ought to be looked at as reverse trickle down economics, with the wealth flowing from the bottom to the top. Neoliberal tactics are modern day extensions of the means that were needed to get the industrial revolution to full steam. The process of privatization is no different than the enclosure acts of the late eighteenth century. Neoliberalism is the current manifestation of the unending power grab within the need to consolidate industry and force open new markets by graft, by hook, by crook or by the end of a gun barrel.

Throughout David Harvey's fantastic exegesis of neoliberalism we can understand the current political atmosphere of cynicism, division and total mistrust of elected officials. Neoliberalism destroys community bonds and creates the Hobbesian notion of Bellum omnium contra omnes (the war of all against all). Margaret Thatcher once quipped "there is no such thing as society". I can understand why Thatcher endorsed this reality. The end goal of neoliberal policy is to weaken solidarity among all groups and castes who might be able to rival the systems of elite class advantage and power. If community bonds and empathy among the working class are permanently ruptured then the power of the elite class will remain absolute. 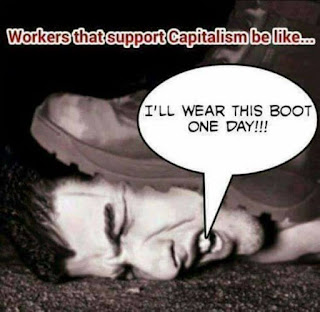 Harvey spends a good amount of time addressing the way neoliberal dogma has changed the way we look at the world. Harvey questions the way we define freedom has changed. During this neoliberal era, freedom has come to mean outright carte blanche impunity for the financier and "entrepreneur" classes at the expense of all of the rest of society, and the environment. This is what privatization, deregulation and a security apparatus that is capable of suppressing dissent achieves. Impunity for elites is the conclusion of this Neoliberal era.


Posted by capitalism canary at 11:19 AM