I've been talking politics, since I was about nine years old. I've been talking politics since before I could even grasp basic political concepts and notions. At the age of nine, I was a Reagan democrat. I remember crying to my a-political mother Saint Ronnie's departure from the Oval Office. I couldn't understand why he couldn't continue to remain in office indefinitely. This is a reminder of how we propagandize our society beginning at an early age. Twenty-five years later I proudly assert myself as an anti-capitalist who knows the suffering brought on by Ronald Reagan's brand of trickle down. 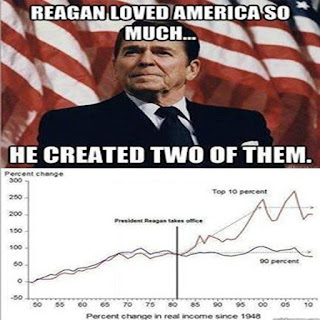 Over the course of all these jaw-jacked years, I hear people (usually cis-het white dudes (I'm one of those too)) say things like "that damn _______, the country is going to hell" and "he's ruining the country"... This rhetoric was heaped on heavy, during all of the administrations I have been present to. This is especially true of the last two administrations. So what if it's true? What have we done to quell the suffering of our lives and the lives affected by our inaction and over-consumption? The answer to that question is, "not enough". We haven't done enough. Now more than ever the onus is on us.

We need to cut the hero worship. We need to ignore the fear tactics. We need to do something bold. Obama couldn't save this country with his watered down version of neo-liberalism, hope and change and Hillary wouldn't have been able to make improvements either. The Trump administration and this hypocritical do-nothing congress that is now suddenly telling us to act like grown ups and act in unity, has the power to ruin our society, our democracy and our lives. We have the capability to take this power from them.
Looking for guidance I once emailed Noam Chomsky. I was upset with an unsavory and right wing tendency that had permeated the local Occupy Chapter in 2011. To my great surprise he emailed me back. He didn't offer me his genius. He offered me the truth.

"No special tricks on how to deal with it. Just keep plugging away." - Noam Chomsky

This truism is needed now more than ever. This truism is how we affect change "You make change when millions of people in this country demand change... When millions of people stand up and fight, they win." This change does not require us to compromise on the necessary elements that have been absent for the last forty years. We do not need to reach across the aisle to the "Trumpets". The "Trumpets" are a minority who are getting played. Our plan to action needs to reach out to the multitude of citizens who opted out of the sham election held on November 8th 2016. There was no effing back lash from the Murican silent majority on the 8th of November. There was only a white-lash of voters (not all white just overwhelmingly) who willing want to turn our democracy and our lives over to a strongman, know-nothing, con-artist.
This minority of the popular vote, who elected their president herr Trump through the corrupt electoral election, can be ruled out as unreasonable for the time being. They will need to wait and see the antipodean winter of discontent that is coming down the New York State Thruway. It is our job to come together, and rally the millions Bernie Sanders spoke of during the primaries.

We need to get to it. We need to pick up where we left off during the primaries. We need to engage in every action under the umbrella of solidarity. January 20th will be a historic day. LET's put our collective affectation on that day. General Strikes are being planned all over the country. Do a DuckDuckgo search on general strikes in your neck of the woods for January 20th. We have the power to become and do what we know is best. Let's do it.
Posted by capitalism canary at 9:08 AM