Red Wings, a tale of two cities and the growing space on my five head.

I must preface this that I needed to take this trip. I have medical bills adding up and a ankle that is not completely healed. I sold a valuable chunk of my beloved Nintendo collection to make this happen, and to pay some bills. 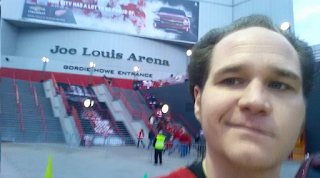 One of the many contradictions I must own up to is my love of professional sports. Not all pro-sports, I mainly love hockey. I was raised watching it, and try as I might I cannot turn away from it. I proudly and to a fault at times root for the Detroit Red Wings. 2016 is a bitter sweet year for Detroit hockey. After thirty-seven years the Wings are playing their final season at the historic Joe Louis Arena (the Joe). I had to make a pilgrimage to the Joe. I had to pay my respects and sing our victory anthem Don't Stop Believing (that shitty Journey song (after a Wings victory is the only time I can enjoy that band)) with sixteen-thousand Wings fans.

I decided to visit Detroit on a weekend the Wings played two games. My time outside of the Joe sad and unnerving. Riding around in the back seat of a "shared (I refuse to name the app/service I used to get around while in D-Town) stranger friend's" car the driver told me he was from the Soviet Union, correcting me after I asked him if he was from Russia. He clearly thought he had another uneducated American as a fair. He tried to get one over about the failure of communism and all of the American propaganda associated with it. We ended up having a great conversation about the different nuances pertaining to the Soviet state capitalist experiment and the hubris of US foreign policy. Meesha was the most interesting "shared stranger friend" driver ever.


The city has improved in many ways, but it is still fractured and beaten. Homeless men and women brave the cold fall streets every where. Prostitutes are on every corner, gang bangers patrol the streets without cause or concern. I had a couple of guys dressed in red from head to toe try to get my attention by saying "we got a cracker up in here". I ignored them and walked by. This wasn't the only time I was called cracker while walking down the street on this trip. I try to understand the pain that goes into wanting to feel the power over an oppressor, so I do not take offense to the men who tried to get my attention in this fashion. I just wish they could see me as I see them. I see myself and those guys as poor working class global citizens who could change the world for the better if we held together in solidarity against the thugs holding the heavy global reigns of power.

The only enjoyable portion of my trip was the hockey. On Saturday October 21st I had the pleasure to join working class hero Rick M. at the Joe for the eleven time Stanley cup Champion Detroit Red Wings vs. the San Jose Sharks (zero Stanley cups to date). We joked that I traveled 1600 miles to see a team that played forty miles from my front door. I reminded him that I traveled 1600 miles to experience the Joe. The game was hard fought. I won't go into detail about stats because I have already gone on to too long about the hockey and need to get to the class struggle that is never ending. As the final clock expired the Wings were up 3-0. The sound man as per tradition played Don't Stop Believing. I teared up, and belted out the lyrics with pride and felt great about this pilgrimage.

After the game, Rick and I decided to grab a bite to eat near Greek Town (the downtown Detroit casino). We took a party bus, sang some Neil Diamond, talked to Wings fans and were dropped off downtown. Rick took me to Niki's Greektown Pizza. As we approached the entrance a homeless man (an artist) got my attention saying hey man "I don't beg, I don't thieve, I'm an artist let me draw your portrait ten dollars." I had to tell him that all I had was plastic, and offered to treat him to a burger or something inside the restaurant, I was feeling too good to say no. As we stepped inside the manager of Niki's stopped the artist and said he couldn't come in. In a rage I asked why! The manager said it looked bad, and that he couldn't have this man begging in front of his restaurant. I told the manager that I offered to treat this man, reluctantly the manager allowed us to be seated "this time".

The artist said he wanted to sit at the bar, I imagine he had sold some portraits earlier in the night and wanted a beer or something. I don't like sitting at the bar so I told the artist that I'll have the waitress bring his burger over. Rick and I ate our meal, I couldn't hold back with my disdain for our society. Rick was on board. How can we have so much wealth and decadence in the exact same space as complete destitution. This mixed market economy and society wastes millions of pounds of resources everyday. This is an abuse of distribution. Our systems as they currently operate cannot improve these atrocities because our systems and hierarchy of control are completely dependent upon the existence of inequality in it's most depraved forms. Proof of this kind of abuse is everywhere. We make up myths about ambition, hard work and we worship the successful as if they could do what they do without our help.

The manager approached me as I was leaving and said that he was sorry and didn't mean to "bust my apples". I replied "you are wind in my receding hairline." He is a pawn in the game of life. He has no power but that which his owner allows him to exhibit. The house is warmer than the field. We will be a free and liberated society as soon as we accept the inter-related and interdependent nature of this beautiful life.

Posted by capitalism canary at 2:30 PM