Yesterday August 7th 2016, I rode my bike the 16 miles from my suburban dwelling, of cognitive dissonance, tourism and NIMBYism (Capitola) down to Wattsonville. I rode down to Wattsonville to participate in an event of outreach with the Wattsonville Brown Berets, and some other folks who did or did not see the post on Indybay.org (great website for local Nor-Cal organizing). I have to mention the bike ride down first. The progress I am making towards getting into bike riding shape feels amazing. I cannot advocate enough to get out of the car and on the bike, if you can. A few of the benefits, I should advocate, you say traffic I say improved mental clarity and a reduced waste line. You say routine automobile maintenance, I say I haven't felt this good in years. You say increased carbon footprint, need I say more?

I eventually found the Brown Beret bike shack. The people were inviting, and I forced myself out of my introvert shell. These beautiful people, had a plan, they wanted to be able to engage in community outreach, so nothing too radical or rousing was on the menu except... One of the Brown Berets found a building that was unlocked that had a room with the windows open. This building faced the main strip of the festival. The plan was simple, make it up to that third story window, unfurl a banner and get five good minutes for our photo journalist to snap a few shots. 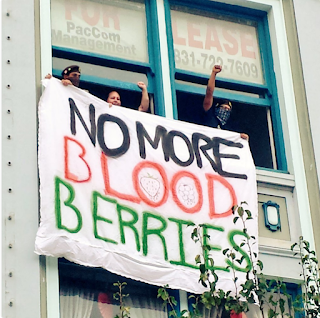 Why should we boycott Driscoll's? We should join in this boycott, because we need to support every worker who is struggling against the hand of exploitation the reality of unsafe work conditions, and the cruelty of unfair pay. We should boycott Driscoll's to show we actually value hard work. Outside of being a full time parent there is no more difficult job with such low monetary reimbursement than farm work, and the berry pickers are among the least compensated for all of the back breaking labor they do ten to twelve hours a day. I hear people of all ideologies and political preferences say all the time "with enough hard work...", as I see it today this is the biggest line of bullshit in our society. Ask yourself does our society seriously value hard work?

"We don't (value hard work). We value dog eat dog business people hence we have Trump as a candidate for POTUS and the poor slobs who support him are too frustrated and uninformed to realize he really doesn't care about them" - JoAnn V


If we do not stand up for those who are struggling, who will stand up for you when we face adversity? We need to show our solidarity with the groups who we are interrelated and interdependent with, or we must admit that we are implicitly guilty by association for not speaking up against exploitative actions.

"The ultimate tragedy is not the oppression and cruelty by the bad people but the silence over that by the good people." - Dr. Martin Luther King Jr.


The Brown Berets were super cool in making this gavacho feel welcome and we had great crowd reaction to the truths behind the boycott. The day ended with Manny (one of the Berets) walking me back to the bike shack so I could get my roadie. He mentioned good crowd reaction and a higher than expected number of pamphlets passed out. I don't know about you fine humans, but it seems this is the time to be out in full support for any and all groups who could have been helped by a Sanders presidency. 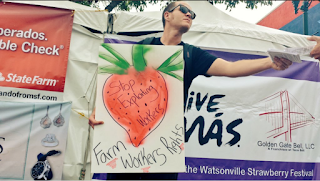 Posted by capitalism canary at 2:59 PM