I'm still bitter, but this is a major historical event. Hillary Clinton and the 19th Amendment

Disclaimer: I am still bitter about the politricks that occurred during the the 2016 primary season. That being said there is a substantial need to celebrate this extremely historical moment that occurred when the DNC nominated Hillary Rodham Clinton as its candidate for the presidency.


It has been less than one hundred years since the last states ratified the 19th amendment. Yes, this so-called greatest nation in the history of the world (stupid meaningless, subjective and nationalistic platitude, only infuriates me.) currently has spent more time denying the right to vote to half the population, than it has enforcing laws that protect universal suffrage. After considering this fact, we have to admit (even if we are not sure she deserves our vote) The events at the DNC in late July must be considered a significant historical moment in the US.

It is a breathe of fresh that the United States of America was the first nation in the history of the world to nominate a female to be this close to head of state. I mean as the world's greatest country in the history of MAN kind, no other nation could have beaten us right? Wrong! In the testosterone states rights (It's the states who determine their own voter laws and systems.) dystopian reality we call Murica, we might finally join other nations who have already elected a women to lead their respective nations.

Here is a list of these other nations, and who served as head of state.

Aung San Suu Kyi, Myanmar (Burma)
Her party won 80% of the seats in a democratic election in 1990, but the military government refused to recognize the results. She was awarded the Nobel Peace Prize in 1991.


I could go on listing the rest of the current female heads of state, but I am just going to copy and paste a link, because I think you get the point. Current Female Heads of state
I include all of the current and previous world leaders not to detract from the historical occasion we witnessed just a few weeks ago, but to illustrate the gap the U.S. has when it comes to how progressive we think we are, versus how very regressive we actually are.

The conservative parties in industrialized Europe, look more like the so-called New-Democrat party, than the BSC republican party. The liberal parties of industrialized Europe make Bernie Sanders followers look like left leaning moderates. Why is this so? Well there was a time when our progressive parties were actually progressive. The shift rightward began with the early Neo-liberal policies that began in the early 1970s. By the late 1970's the U.S. was dismantling Keynesian policies, and choosing to endorse a presidential candidate who demonized recipients of state and federal aid as welfare queens.

This is not to say that our current politics have been completely devoid of progressive changes. There have been a few major social changes, and we have in theory reformed our health care system (IN THEORY. In practice... time will tell.). What has our governmental or sectors of private enterprise done to reform our broken economic systems, or the continual oppression we see people of color endure? We have done very little to usher in change over the last 46 years. This is what I take issue with when considering if my ballot will be cast for Hillary Clinton. I cannot endorse four more years of the status quo. I cannot stand by idle, hold my nose and pull the lever for continued wealth and income inequality. I cannot take her word, on foreign policy after so many years of hawkish bravado, buttressed by the business community who has a greater say than we the citizens of the United States. We know police standards, policies and especially practices won't be changed over the next four years, so like everything else we are going to have to push the hand of power to act. 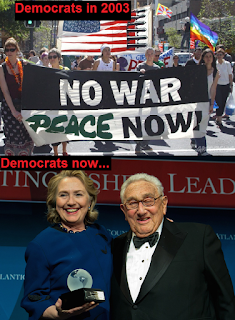 I wrap this up, again acknowledging the historical significance we witnessed. Last thing I will type is, if I vote for Clinton in November I will continue to be an avid critic. We cannot go home with only a platitude like we did in 2008.
Posted by capitalism canary at 2:29 PM