As a frustrated proletarian I am constantly looking at my co-workers, asking myself "why aren't they as angry as I am?" I tend to think my co-workers are less angry and less aware of their servitude than they should be. I try to converse with my more open minded co-workers about our plight. Some are apathetic, some don't know what to do and others would throw down for our cause if they could. During a recent conversation with a co-worker he or she (for the sake of anonymity) a co-worker explained to me how my angst isn't realistic, going on to explain that even if he or she was ready to throw down their gloves and join the struggle, what would we do to pay rent, and provide for our families?

What this exchange made me realize is that while there are several workable alternatives to this economic system of labor, which currently exploits the majority of human beings and the world as a whole, none of them are able to provide today. This realization is based in the fact that I could not offer my co-worker a place for his or her family to come live and sustain themselves while we take it to the man and redistribute the means of production so that we defeat wage labor as we know it. 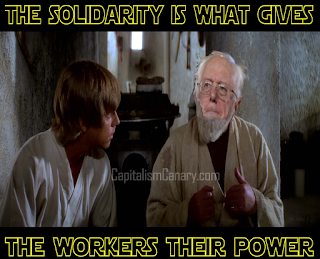 We need to be able to offer a working alternative for today in order to attract the masses. It is not enough to say "grab a picket sign and let's forget about the need to pay our bills, our families will understand, promise me, this will free us, and offer the ability to participate in power, no longer will we be disenfranchised, and hopeless". We need to be able to offer an alternative that provides all of the basic means and needs while we are building solidarity. Any union boss or activist can tell you it is through solidarity and unity among the activists and workers that gives power to the cause. How do we garner the power of solidarity when we have one foot devoted to our cause and the other devoted to showing up to work? How do we serve ourselves when our first priority is to serve a system that is bent upon our subservience to the status quo? Any movement is bound to be divided when we attempt to walk both directions of a forked road.

In fight club Tyler Durden was able to offer bunk beds in his decrepit Paper Street squat as an alternative to the day jobs his minions worked. Chuck Palahniuk, was probably evoking a metaphor for something that doesn't exist. However without the Paper Street Victorian mansion, Project Mayhem would be a pet project on the back burner part time volunteers showed up for when they weren't too tired. The idea of full time and dedicated activists is not original to the Fight Club novel, but it is something that needs to be inserted in to all of our causes. We cannot stand up for ourselves when we are bending at the knee forty hours a week. 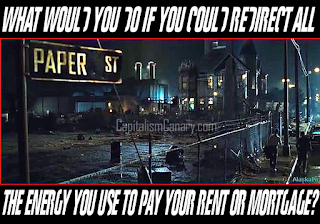 An alternative to paying rent is the obvious downfall to the rentier portion of the exploitative class. Once we are out from under this class, we will be better equipped to rage against other portions of this class. If we consider what Occupy camps did was offer this alternative. Occupy failed for dozens of reasons, but we were onto something. Should it be any surprise that the biggest point of contention between occupy activists and city officials was a taking back of the once commonly owned land? What would you do if you could redirect all the energy you use to pay your rent or mortgage?

Posted by capitalism canary at 3:33 PM