Celebrate Rosie through the patriarchal glare of our glass ceiling. 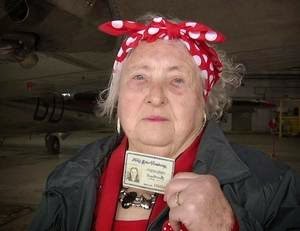 Loraine Osborne, a former 'Rosie the Riveter' who worked at the Willow Run bomber plant.


On this Memorial day 2015 I choose to remember the persons whose war efforts made the difference, but are rarely credited. Millions of women made contributions to the U.S. World War II effort here at home. These women were branded Rosie the Riveter by song writers Redd Evans and John Jacob Loeb. The term was meant to be affectionately catchy, part of a cheerful song that built Rosie the Riveter up, portraying their contribution to the war effort as invaluable by not only her work on the assembly lines, but also in her purchasing of war bonds.


The story of Rosie the Riveter is rarely discussed in high-school textbooks. Even less discussed is what happened to the women who filled the spots in the factories vacated by draftees. After the war was over, after the ticker tape parades, when life returned to the new normal, the women who wanted to remain working were laid off en masse.

The rise of our consumer culture and a new set of social ills during the 1950's and 60's, women began returning to the work place. Positions in the factory were no longer available to most women. The concepts of the stereotypical secretary, nurse, and teacher were re-introduced and reinforced throughout the first two decades following World War II.

This was a time of rigid gender roles, many of which we still endure today. During these decades, the foundation for our glass ceiling and glaring wage gap was paved. The social factors paved during the 1950's, 60',s and 70's, were ripe with abuse, discrimination and a failure to view women as equal partners in our society. These social continue through this day.

If your eyes are open, the dominate normative standards of our culture, are not hard to see as abusive and suffocating. The stranglehold our hyper-masculinized patriarchy has on everything is all encompassing. It permeates our language, our attitudes, and all the ways we interact. If a man is not filled with testosterone and  hyper-masculine qualities, he is told to 'grow a pair', or that he is a 'pussy'. Remembering a joke I first heard Betty White tell, I have to laugh.

(“Why do people say "grow some balls"? Balls are weak and sensitive. If you wanna be tough, grow a vagina. Those things can take a pounding.”)

This part of our culture is hegemonic in scope. If a man is not masculine enough he is negatively referred to as one of the pejoratives above, or another disparaging ad hominem, which is reserved for males who act outside hetero-normative standards. If a female acts too masculine she is a 'bitch', or a list of words outside the scripted and constructed feminine ideal.

It is these social relations within a totalitarian and unfair work place that dominate our day-to-day lives. I cannot ever claim to fully understand the frustration women feel. The fact of the matter is, I lack the epistemic privilege to fully comprehend the indignity suffered by females in our society. However, I'd have to suffer from a serious case of cognitive dissonance to not realize the unequal relationships of power between men and women in our society. I can also empathize and hope to recognize the daily stressors women experience. Most men are incapable of even the simplest realization of the attitudinal and linguistic double standards. I refuse to be most men. It is my job to foster a new consciousness among "most men".

Too many Muricans are glorifying the "ultimate sacrifice" while cranking up the Lee Greenwood. Let us remember Rosie and all women in the work place and at home who are treated as second class citizens, under-valued, and widely unappreciated in our lives and our society. How are we free when half of our population is routinely discriminated against? 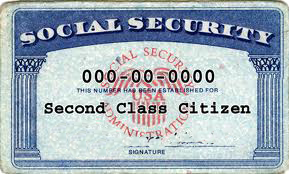 My attempt to engage with why feminism is needed in the work place falls short of recognizing all of the sources of subjugation placed on women in our culture. I plan to re-visit this topic in the near future. I hope to further explore the glass ceiling, the wage gap, discrimination, harassment in the work place, re-productive rights, and all relative topics. It is my hope that I can support in solidarity the world wide Women's movement. I cannot wait to hear your voices of leadership, especially from the rank and file members of our female work force.

If you read this far down, thank you so very much. Let me know if I got anything wrong, made grammatical errors or missed the mark.
Posted by capitalism canary at 8:42 PM