Too big to ignore

Another week has passed. A week that is polarized by persons looking to fulfill their early holiday traditions with the growing discontent along racial lines, police brutality, gun violence and social upheaval. These are topics I don't want to blog about. These are topics I wish didn't repeat as often as they do. The truth of the matter is these issues cannot be ignored. These issues cannot be described as false narratives or reduced to tit for tat battles between left and right. These issues need to be examined very closely. Examined under a lens which seeks understanding with eyes of compassion and empathy for the victims and their loved ones as well as the way we look at one another. The pundits and hacks who use these tragedies as a means to further their political agendas need to admit he or she probably cares more about propping practices and normative standards more than they do about curing the social ills which contribute to the heart ache we all experience.

It is saddening, all of the struggles we currently witness are occurring during this month of December. A month when most of us talk about peace on earth, their personal savoir, love, family and giving. This month in my honest opinion is an act of too little too late. The mood and act is suppose to include all of said sentiments after a year where we treat one another absolutely terrible, where we look at each other through the lens of makers and takers. Why is it eleven months and twenty-nine days out of the year we treat one another like crap? Why is it leading up to December 25th we engage in a shopping season where consumers demean retail workers with vile intent, in order to get a deal, or save time because he or she is in a hurry and has to get to the next store for the next sale? Then after mass consumption we ignore our bad behavior for a day and a half on December 24th and December 25th we profess all the fuax notions and sentiments listed above? It's a sham holiday. We should be treating each other with the kind of sentiment we equate to Christmas every day of the year, regardless of business projections, stock quotes or because we're in a hurry.

I keep hearing that the current system we have or a version that feature a freer market is the best way to organize our society, the best way to distribute goods and so on. The fact that we only have the time and want to treat one another with compassion and love one day of the year proves we are mistaken to believe this is as good as it gets. This truth is too big to ignore.

Merry every day of the year. 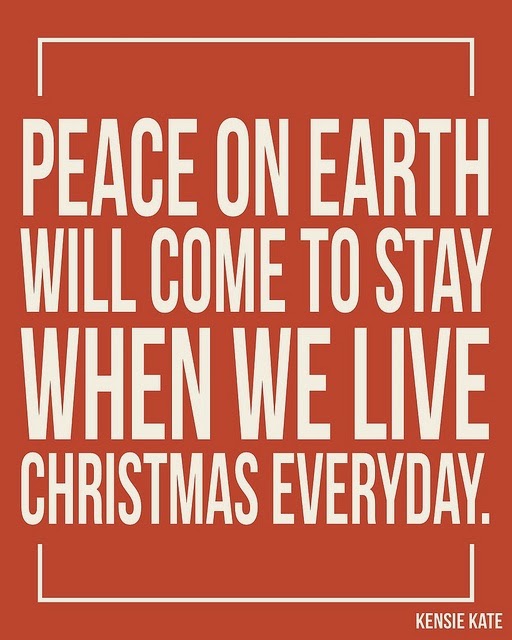 Posted by capitalism canary at 4:09 PM