Bias in the News. How this is not neat. Reuters and Bloomberg have a vest bias. 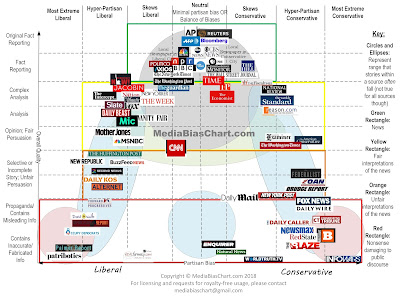 I need to point to Zizek on this kind of thing. Zizek makes an argument something along the lines that the best ideology is one that we don't recognize or consider to an ideology, but is just the way life or reality is. This point can be clearly found on how this chart puts the heavily pro business Reuters and Bloomberg, as neutral. The way this chart uses the word Partisan* is extremely problematic as well. Sources like Democracy now and the Intercept are not mouth pieces of a party. If you consume articles or audio from those sources they take both parties to task on a regular basis. Amy Goodman gained huge notoriety in the 90s by taking a campaigning Bill Clinton to task when, he thought he was going to get the puff piece treatment by an up and coming "liberal" commentator happy to speak to a presidential candidate, but Goodman pressed Clinton to a point of anger because he was pressed on his platforms. (Here's that interview. https://www.youtube.com/watch?v=FWx1bX4hWtM )

Then you have the intercept. If they were hyperpartisan they would be towing the Russiagate talking points that the DNC was desperately trying to float as fact. However the Intercept worked hard to show how flawed this was pointing out how mouth pieces of the DNC like Rachel Maddow were ignoring evidence in order to spin Russiagate into the minds of our body-politic. On this same point, this graphic lists MSNBC as opinion and fair persuasion when it should be lower on the chart as propaganda/contains misleading information.

I take credence with the following quote.

"If you look at this chart and are convinced your “extreme” source belongs in the middle, you just might be part of the problem plaguing America today."**

I am not saying that the outlets I mentioned should be in the center. I am trying to say that there really is no center and the chart is flawed. That top center category has an inherent interest in making sure what gets reported is through the western lens of reporting. This western lens has a concerted interest in making sure the channels of capital remain open and flowing.

I also realize that this article is really trying to take the extreme media outlets like INFOWARS to the shed. I agree that Alex Jones' efforts has completely damaged the minds of his listeners. I have a friend who cannot get away from the kinds of conspiracy theories that has made Jones famous (by the way Bill Hicks might be playing a joke here)***.

If we look back to a bygone era of news anchors like Walter Cronkite, Edward Murrow, David Brinkley, Peter Jennings, Ted Koppel and Dan Rather even they presented heavily biased information. Yes they were often reporting as news was happening but we have to acknowledge that they were reporting through the ideology of the United States. This ideology is a mixture of lots of different dynamics. These dynamics are something we need to dissect and cross reference to get at the heart of what happened.

To that point this is why a good education in critical thinking is necessary in a democracy. We have to know how to think and how to dig beyond what we want to hear or see. The age of social media has allowed us to build bubbles so we hear and see only what we want to hear and see. This is the age of cognitive dissonance. We need to strive for the strength in ourselves to be able to reality check our deepest inner beliefs in order to have any kind of real grasp on reality.

Sorry for the long ass diatribe here, but I see this chart as extremely scary because it lets us off of the hook if we stay within whatever guidelines we accept from this chart. This is a terrible time in history to do this, because even those neutral and non-biased news outlets have by in large stopped doing investigative journalism and just accepted whatever briefing is fed to them, be it from the white-house or from a multinational corporation.

*Partisan means more than party loyalty. It can also mean adherence to a faction or interest e.g. liberal or conservative. However in our times the dominate mind set, is liberal equals democrat and conservative equal republican. Labeling strong investigative work as partisan dissuades the mind, and creates bias before we even begin reading or listening.

***If you got this far in my blog post The crack about Bill Hicks is related to a little known conspiracy theory that argues Bill Hicks is Alex Jones...

Again sorry for all of this, but I have to disagree, in saying this chart is anything but neat.

Posted by capitalism canary at 4:52 AM