didn't know what time it was, the Bernman came and met us, and blew our mind.


This is a two part blog, mostly written for the sake of my own need to process our recent historical political events. I hope the second part will be more even keeled, and less angry.

We are immune consultation, we are quite aware of what is going on. All of the vitriol I am seeing from democrat party officials, talking heads on cable news, and the endless voices on social media is an example of how this two party system fails democracy. You NEVER get to stifle debate and civil discourse in a democracy. All of the calls from the corporate democrat party to gloss over the divisions in the party and kowtow to the neo-liberal Clinton agenda to avoid Trump fail. YES YOU FAIL. You fail in the name of decency, in morality, honesty and most of all democracy when you stifle civil discourse.

I watched the first three days of the DNC convention, waiting for a message about the platform going forward, but all we got were platitudes about leadership, and gushy attempts to make Hillary look like a good person instead of the life long politician, executive, lawyer, and a heaping dose of how evil Donald Trump is. The party conventions were inverted images of one another, "we so good and righteous, they so bad, and morally bankrupt."

There were calls for extended warfare and a second (the first being Donald Trump) universal bogey man in the name of ISIS was dropped, to ensure us this Orwellian endless war will continue. Tell me when was the last time our intervention in the middle east actually made the situation better? Celebrity speakers were ushered onto the stage to make sure identity politics kept our interests, and all of the rest of the pomp on circumstance went on as business as usual.

The lack of policy, a game plan beginning on day one of the presidency, was a core tactic of the convention, not because team Clinton doesn't have plans, but because the democrat party is divided and they had to walk a line to ensure voter turnout, or ballots cast wasn't disturbed. The question I have is how much does the New Democrat wing of the party truly hate the progressive (the liberal) wing? It's no secret that corporate democrats abhor the truly progressive voting blocks. We shift the party left, we make the candidates and elected officials take actual stances. The rest is all tribalism my our team vs you team. Of course there are exceptions like Sherrod Brown, and up until recently Elizabeth Warren (she owes us an apology and needs to atone this sin, by pushing harder than ever in the senate.)

The bright shining moment came on Wednesday night. The beautiful people from Oregon and California began the night holding anti-TPP signs. This act of insolence and rebellion is a sign to me. This is a sign that the activists and hard working people, who went for zero to the cusp of a nomination for Bernie Sanders will endure. It must endure, if we (some more than others) don't continue the organizing we have engaged in this last year, the pro-corporate agenda of both parties will give us another 4 years of this Milton Freidman dystopian nightmare. 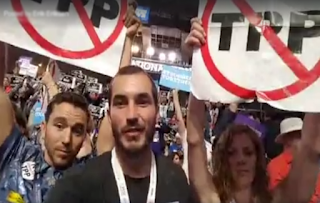 I realize this will not be a popular argument to make with dyed in the wool democrats, but we need to realize that in terms of economic philosophy Clinton is still a supply side theorist. Every neo-liberal politician is. The truth in this assertion can be found in how business interests are put first before all else. Sure if marginal tax hikes, or menial pro-environmental policy made it through congress, Clinton would sign it. However, will she make actual progressive moves, without being pushed to do so? I think not. Proof of this will be found when the TPP is ratified (it should be considered a treaty) at some point during Clinton's first term. If I am wrong, I urge you (the 8 people who actually read my drivel) to tell me "she told you so".
Posted by capitalism canary at 2:32 PM