Today August 8th 2013 anti A.L.E.C protests occurred in Chicago. The event looked "well attended" from the pictures I saw and the videos I watched. A.L.E.C deserves protest inasmuch as their cookie cutter legislation of voter id laws and right to work legislation, attempts to thwart living wage mandates, stand your ground laws and attempts to privatize education. These measures are being rolled out in front of state and federal legislators by A.L.E.C lobbyists.

A.L.E.C is funded by big money interests and serves to undermine the will and want of our U.S body politic. Protesters were arrested. The way ustream video appears, the police intervention is a frightful example of who the men in blue work for. This kind of protest shows the kind of power we have when we leave our desks and armchairs. The only power we have is when we show the bulk of our numbers, in spite of arrests, and any feelings of shared futility of action. It is difficult to bring groups together when there is so much to disagree on, but as we can see today, when we can come together and acknowledge shared concerns we can bind together, it is our only method to affect change without massive amounts of corporate cash (I for one am fresh out of corporate millions).

A.L.E.C has passed 117 cookie cutter bills in 2013 alone. If they aren't a entity to focus energy on nothing is. As much as I like the idea of taking it to the streets to call out A.L.E.C specifically I think a better focus is on the companies that fund A.L.E.C. In April of 2012 both Coke and Pepsi left A.L.E.C. possibly because they were afraid of losing business based on being a part of the conservative think tank. Let's cut of the heads of the hydra. 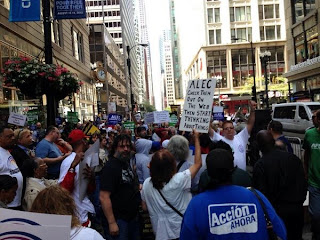 The list of corporate members is immense. If you take the care to read blogs like mine you probably already do a good job of boycotting their biggest selling products. I am going to copy and paste a list of the corporate members. The fight we wage is immense and heavy. No better example of class struggle, one person one vote vs money fueled politics is apparent. What we do other than blog and engage in exposing A.L.E.C through various forms of social media is completely up to us. I for one have to believe we as the masses still have the ability to fight the powers that be. Here is the A.L.E.C corporate member list.


Posted by capitalism canary at 6:26 PM